I have never written an article about my wins and losses for any year. Well, I mostly run a quick recap in my head and think of what to do the next year but 2019 is different. In fact, I have to achieve a lot next year for it to beat 2019 because 2019 was the bomb. I might be overexaggerating but it was actually better than I anticipated. I’d like to call it the best year of the last decade.

Let’s start with the highlights of 2019

Let’s jump right into the details;

I clearly remember the first day of 2019, I spent the entire day watching movies at home which may not be the best move for most people but I just had to finish watching all the movies on my laptop that day. The next day, I told myself it was time to write down some goals for the year. I literally can’t remember most of the things I wrote down because I had to tear out that particular sheet from the book and throw it away when I realized I achieved nothing I wrote down there almost 4 months into 2019. At some point, I came to the conclusion that writing out certain things you want to achieve can make you really depressed when you realize you’ve not even come close to achieving any of them but that’s a story for another day.

I graduated from university in August 2018 and based on government policy in Nigeria I had to enroll for the National Youth Service Corps (NYSC). Unfortunately for me, I was posted to Taraba state and this meant that I was supposed to spend one year in that state serving Nigeria. I had never been to Taraba state before so you can imagine how I felt when I thought about the possibilities of staying there for a year. After the 3 weeks camp in Taraba State, I was redeployed to Lagos State late in December 2018. So I started looking for a good tech company to serve in for one year. Honestly, the search was a journey in and of itself but I won’t bore you with that. I eventually got an opportunity to serve in Interswitch in April of 2019.

Interswitch: I joined Interswitch as a core member (NYSC corper) on the 15th of April, 2019. Interswitch has always been a company I admired so much because they helped Nigerians perform transactions seamlessly ranging from ATMs, POS, mobile applications, ATM cards, etc. It was one of the best things that happened to me in the second quarter of 2019 and I didn’t take it for granted. I joined the Research and Development Unit of the Engineering group and worked in the Developer Relations team. I was in awe of the work culture, everyone was super amazing and welcoming which is not something you see in most companies. After I completed my NYSC at the company, I applied for a full-time role, went through the interview process and got an offer to join as a full-time staff in the same team.

I got accepted as a technical writer for the Season of Docs program by Google and I was opportune to work with the VideoLAN organization. If you don't already know, the VideoLAN organization owns the VLC media player which has been downloaded over 3 billion times and I believe you know we are over 7 billion people in the world right? So that means almost half of the people in the entire world have downloaded VLC into either their phones or desktop. I was super excited when I got an email that my proposal was accepted. I think I literally almost threw my laptop on the floor out of excitement. It was a surreal moment for me. I have literally been using the VLC media player since I was in secondary school and the fact that I worked with this organization for over 3 months was mind blowing. The amazing thing about making open source contributions is that you get open to a lot of opportunities, you have direct contacts with people doing amazing things in the world. This girl right here was opportune to have meetings with the president of VLC in 2019. Mad oh!

I absolutely love making open source contributions and I will publish an article about my open source story very soon. In view of advocating for Open Source in Africa, I joined the Open source community Africa team to organize the first ever “Open Source Festival and Sustain Summit Africa” to bring together open source advocates from across Africa. This festival is coming up in February 2020.

I am very passionate about developer communities and I love talking about the importance of venturing into tech as much as I can.

Developer Circle Community Uyo: The DevC Uyo community is a community that is so dear to my heart because this is the community I started with back in 2017 and leading the DevC Uyo community gave me an opportunity to learn, grow, network and become better as a developer and community builder. In 2019, we started with 1663 members and at the end of 2019 we grew up to 3100+ members. We’ve held over 6 meetups around topics including but not limited to React, Women In Tech, Open Source, HTML 5, etc. For the very first time, we held the #DevCUyo100DaysOfCode challenge which helped a lot of developers in Uyo challenge themselves to learn a particular skill for 100 Days. The number of people whose lives were positively impacted by this was enormous. 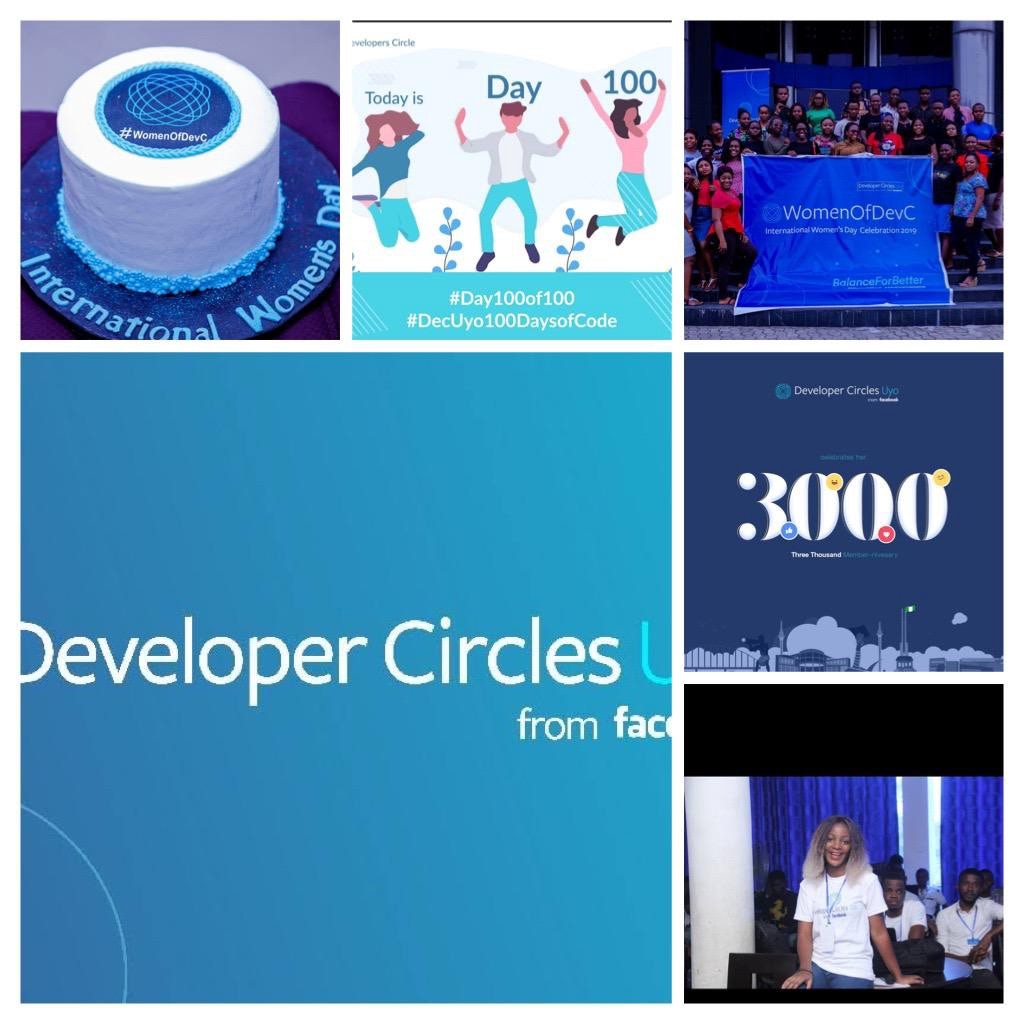 Women Will Uyo: I also joined the Women Will Uyo community as a co-lead in 2019. This was exciting for me because I want a lot of women to get involved in tech. In a couple of months since we launched the community in Uyo, we were able to help 200+ women make the most of technology to build skills, get inspired, and connect with each other through training, events, and advocacy.

She Code Africa: In order to bring more women in Tech, I joined the core team of She Code Africa as a Chapter Leads Coordinator and the tweet below throws more light on our achievements for 2019.

This year, I spoke at 5 events: 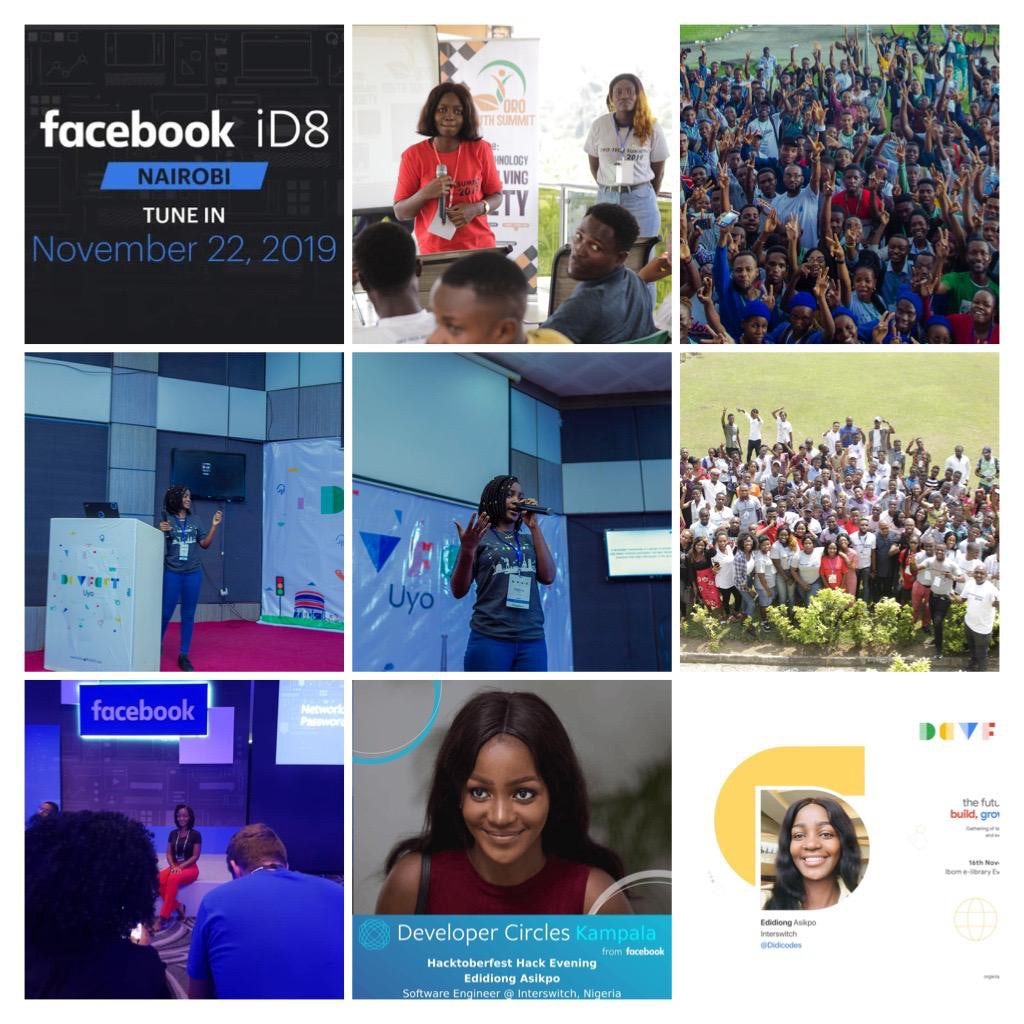 If I am not mistaken, August was the best month in 2019. I was shocked to see an email from Facebook inviting me to attend the Icons of Change summit in Accra, Ghana. The aim of the summit was to celebrate 40 young community leaders, creators, developers or entrepreneurs from across Sub-Saharan African impacting and shaping the future of the continent. This was my first trip outside Nigeria and I was thrilled to attend the event. Aside from leaving Nigeria for the first time, the most exciting part about this was that out of everyone in Sub Saharan Africa, I was among the 40 people recognized as an Icon of Change by Facebook. You can trust Facebook to give you the best treatment when you are invited to any event sponsored by them. I was lodged at Kempinski hotel (One of the best hotels in Ghana) and I was blessed to see so many other young people who were intentional about their lives and doing extraordinary things that impacted Africa as a continent. Aside from attending the summit, I was also opportune to meet and interact with young girls who were learning how to code at an event organized by Developer Circle Accra. 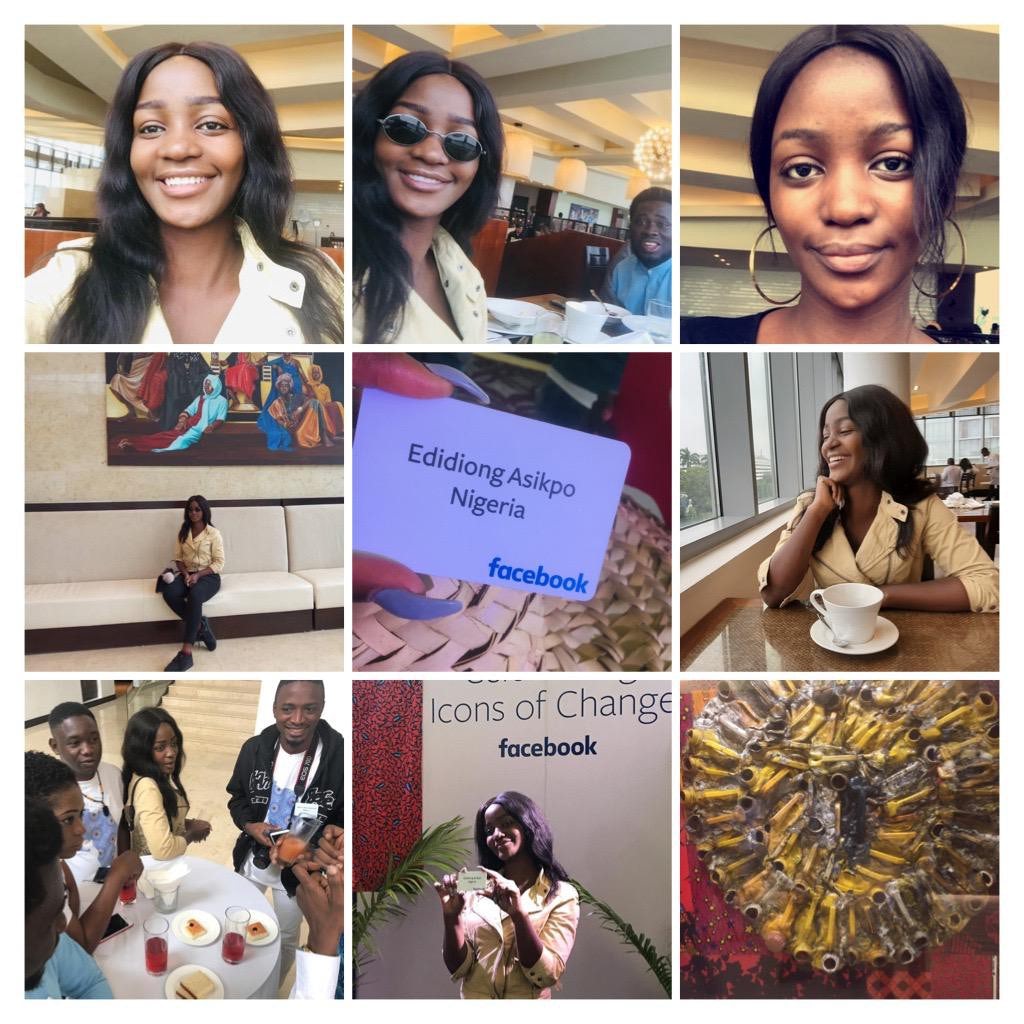 Every year since the launch of the Developer Circles community by Facebook in 2017, community leaders of the community have a summit at the end of every year in a particular country in Africa to reflect on the things we did for that year and our plans for the next year. This year, the DevCSSALeadsSummit was in Nairobi, Kenya. It was exciting to see all the developer circle leads from different countries across Sub Saharan Africa once again. The leads summit lasted for two days.

On the third day, I was opportune to attend the Facebook ID8 summit. This was really amazing because once again I got to see, interact and learn from other people who were doing great things in the tech industry and also learn about Facebook’s new products and services from the Facebook team.

I love clouds, I love nature, I love seeing beautiful places and the Sal Island in Cape Verde was all of it. Sometime in December, I went to Cape Verde on vacation with the best person in my life and this trip was magical.

Yes, I saved the best for the last. Sequel to the invitation I got to attend the Icons of Change summit in Ghana, I also among the 5 young people selected from Sub Saharan Africa to share my story and how Facebook has helped me in achieving the ongoing success in my career. This was huge for me because it served as a source of inspiration to so many people and also to me too. It reminded me to keep striving for greatness and helping a lot of people to join the tech world. The interview was shared on Facebook’s official page on Facebook with an audience of over 200 million people all over the world. I was humbled, honored and energized to do more.

I’d love to thank Chimdindu Aneke for the recommendation and continuous support.

Without a doubt in my heart, I can boldly say 2019 was the best year in the last decade. I was able to achieve so much last year. Even though there were a lot of Ls, I am grateful to God for all the wins.

At the beginning of 2019, I told my friends that 2019 was the year I was going to work really hard and achieve a lot while 2020 was going to be the year for babygirling. Well, that is exactly what I am going to do in 2020.

Thanks for reading and have an amazing year!